I have visited recently the Maeslantkering surge barrier in the Hoek van Holland area, near Rotterdam. It is an impressive construction with an important role: to protect lives.

But before I tell you more about the barrier, here's a short introduction about The Delta Project.

After the big flood in Jan-Feb 1953 (in Dutch is called watersnoodramp) and the 1836 people who died because of it, things became clear for the Netherlands[1]: they needed to be better prepared for this kind of events.

133 people died when the MV Princess Victoria ferry sank during the storm. This ferry had the capacity for 1500 passangers, a length of 94 meters and it weighed not less than 2694 giga tons. Considering this, I think it's safe to say that this wasn't like any regular storm and while this kind of events don't happen very often, its consequences are going to be remembered for many, many years. While a storm surge barrier couldn't have saved the people that died while at sea, things would have been very different for the people who lost their houses or even their lives. 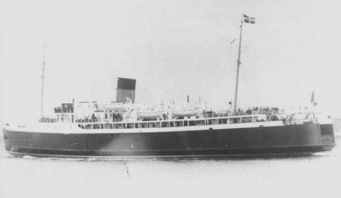 The MV Princess Victoria ferry[2]This is how the Dutch decided to build the barage system that will become the biggest flood protection project in the world: The Delta Works. This system would reduce the probability of a flood to 1 in 10 000 years in key areas of the Netherlands, if properly maintained, of course.

About 40 years after the first Delta Works dike was built, the construction of Maeslantkering began (1988). A mobile flood barrier on one of the most important commercial routes for the Netherlands: the waterway connecting the North Sea with the Harbour of Rotterdam, the biggest port in the world at that time. This meant that the barrier had to be built in such a way that it didn't hinder the commercial traffic in the area, where any hour of interruption would cost the authorities a great amount of euros (or guilders, the national currency until it was replaced with euros in 2002).

The solution came from the BMK consortium (Bouwcombinatie Maeslantkering) who presented the best solution for the requirements of the project. This solution consisted in 2 “pizza slice” shaped constructions, one placed on each banks of the river. The radius of the “pizza slices” is of 273m and each of them is connected to a ball and socket joint weighing 680 tons. 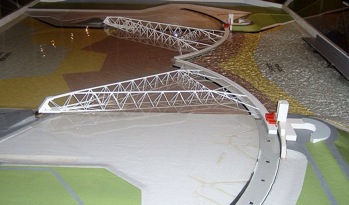 A scale model of the barrier[3]In order to move these giants, the bays where the 210 meters long gates stand by are filled with water. When the gates are floating, they are pushed into the middle of the river by a powerful engine. After they reached the desired position, the gates are sunk until they reach the reinforced river bottom. This whole procedure takes about 2.5 hours and reverse is around the same. So in case of a storm during which the level of the water would reach 3m above sea level, the traffic on the river would be closed for at least 5 hours.

See it in action

Since it was completed, Maeslantkering was closed only once due to a storm and even then, the trigger for closing was lowered to 2.6m[4], so the authorities had a chance to test the new “toy”. Every year, the barrier is closed once for testing purposes. This year (2013), this is a public event, anyone can join and watch, for free. Mark the date in your calendar: 21st of September, you can find the latest updates about the event and details of the location on the official website: www.keringhuis.nl

comments powered by Disqus
Theme of the month: Deliberate Practice
Problem solving and the random factor